Some people choose to walk from Jedburgh to Kirk Yetholm in one day. With the knowledge that the stage involves a fair portion of walking on the road we decided to split it into two stages, breaking for an overnight stay in the small village of Morebattle. In addition, instead of backtracking along the Borders Abbey’s Way to where we had left St Cuthbert’s Way to walk into Jedburgh we decided to take a taxi back to what is locally known as the “bridge”, a well known drop off and pick up for hikers on St Cuthbert’s Way. From there we again climbed the hill that we had climbed the previous day and continued along St Cuthbert’s Way, leaving the old Roman road, Dere Street,  to pass through a strip of forest between two fields overlooking the valley below. The Way passed through more fields and forest until we came out onto the tarmac at Cessford.

A short walk along the road and we were at the day’s highlight, the ruins of Cessford Castle. Built by the Ker family in around 1450, the castle was an important protection from not only the constant incursions by the English, but also from the bitter rivals of the Kers, the Scots of Buccleuch. Once described as the third strongest in all of Scotland, by the time we visited it was a mere shadow of its former self, albeit with impressively thick walls. The most famous siege of the castle was conducted in 1523 by the Earl of Surrey when its owner, Sir Andrew Ker, was absent. A battery of 11 cannons fired on the castle, but did little damage. Unfortunately for the brave defenders of the castle, Sir Ker returned and promptly surrendered to the English commander on the condition that he be able to leave with bag and baggage. The English commander remarked that had the defence continued he did not know how the castle could have been taken. 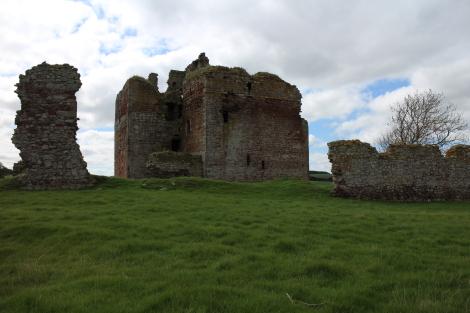 We left the castle behind and continued along the road until we reached Morebattle, derived from the Anglican “mere-bool” meaning “dwelling place by the lake”. No lake remains having been drained as part of 19th century agricultural improvements. We stayed in the village’s only pub,  the Templehall Inn.

The following day we had one main task – to hike up into the Cheviots crossing Grubbit Law (one of the many Scot’s words for hill) and Wideopen Hill, which at 368m is the highest point on St Cuthbert’s Way and marks the approximate halfway mark, before descending to Town Yetholm and Kirk Yetholm. Our first experience of the Cheviots was wild and woolly – we were beset by strong winds and rain, although we were later told by another hiker who followed a few hours behind us that when  he crossed the top it was sufficiently pleasant that he had a nap in the sun.

Town Yetholm and Kirk Yetholm are two small towns divided by a stream which is crossed by a bridge. Both have pubs and given that we had plenty of time we visited each. The pub at Kirk Yetholm, the Border Hotel, was by far the busier of the two and served an excellent Sunday carvery. Our accommodation for the night was the Mill House B&B – luxurious accommodation renovated by the current owners from a once derelict mill house and 17th century granary (the “before” photos are unbelievable – a real grand design project). Kirk Yetholm is an attractive and popular village for walkers, also being the start of the Scotland National Trail (the new trail which traverses the length of Scotland) and the Pennine Way.